I’m currenlty working on extending a legacy project with multiple new modules. The original project was started as a WinForms application and contains hundreds of existing forms which we decided to not change due to lack of resources. In contrast, to ensure that at least the newly created modules are state of the art, I’d really like to create those using WPF. However, when trying to add a new WPF window to the project in Visual Studio it turns out this is not possible – I’m only provided with the option to create a WPF user control:

After playing around a bit, I found out there are two ways of making WinForms projects work with WPF windows:

Since the project is now officially classified as WOF project, this wizard should now contain the WPF window option. By the way, since there is no WinForms project GUID that could be overwritten, this approach does not harm the existing project components.

Independent of which approach you take, before being able to reference WPF windows in code, you’ll need to add a reference to System.Xaml to the project: 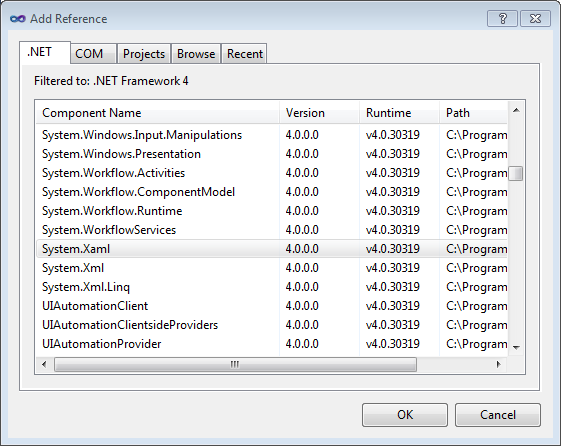 Now, you can instantiate and open WPF windows from C# code, e.g. from within a WinForms form:

By the way, it is also possible to open modal WPF windows on top of a parent WinForm: